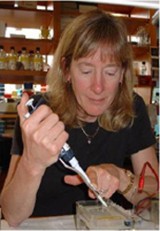 We are interested in understanding the role of cellular tumor suppressor genes in normal development and cancer. To this end we have focused on determining the molecular pathways that regulate a cell’s switch from proliferation to differentiation in various epithelial tissues of the mouse eye. 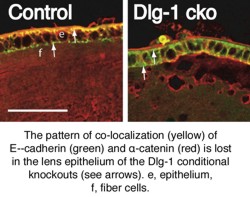 Through our studies, we have contributed towards the understanding that the retinoblastoma susceptibility protein (pRB), which when mutated leads to retinoblastoma and other cancers, and its family members along with multiple growth factor signaling pathways are coordinately involved in regulating the developmental processes in the eye. Proper cell adhesion and polarity also are believed to be vital to the growth and differentiation of epithelial tissues and to maintaining their long-term integrity. In Drosophila melanogaster and Caenorhabditis elegans members of the PDZ (PSD95/Dlg/ZO-1) family regulate cell adhesion, polarity and proliferation. A major emphasis in the lab is to understand if, and how, the mouse homologs of dlg and scrib contribute to mammalian development. Finally, due to one approach used in the lab, we also are learning new properties that certain oncoproteins from human papillomaviruses (HPV) possess in vivo and how these novel activities may contribute to HPV-associated cancer. We use a variety of genetic, molecular, cell biological and embryological techniques and transgenic and knockout mice.

Little is known about the potential role of Dlg-1 and Scrib in the vertebrate development. To this end, we generated conditional knockout models to determine the requirements for these PDZ proteins in the mouse development. 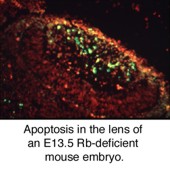 These genes appearto be essential for multiple facets of mouse development, including the eye. Our recent analysis suggests that Dlg-1 and Scrib may regulate lens cell growth and differentiation in part by affecting cell adhesion complexes and their associated signaling cascades. Additionally, these factors appear to be involved in regulating signaling pathways that affect cell and tissue polarity in the lens. Finally, our data suggest that these factors may interact in regulating the same pathways. Current and future work will continue to explore the specific roles of these proteins in mouse development, to uncover the mechanistic connection between growth factor receptor signaling, cell adhesion, polarity and cell cycle control, in the regulation of lens cell proliferation and differentiation.

In some of our earlier studies, we determined that pRb is required for cell cycle control in the lens, at least in part through its ability to regulate the activity of the E2F transcription factors. More recently, we have been using biochemical approaches such as chromatin immunoprecipitation (ChIP) to dissect the specific role of pRb and individual E2Fs factors in the regulation of E2F target gene expression in proliferating and differentiating lens cells in vivo. We also have examined the unique and overlapping genetic requirements for Rb and its family members in cell cycle regulation in the embryonic lens. Finally, we are interested in exploring pRb’s possible role in the transcriptional regulation of differentiation by characterizing knock-in mice carrying a subtle mutation in Rb that specifically affects pRb’s interaction with chromatin remodeling factors.